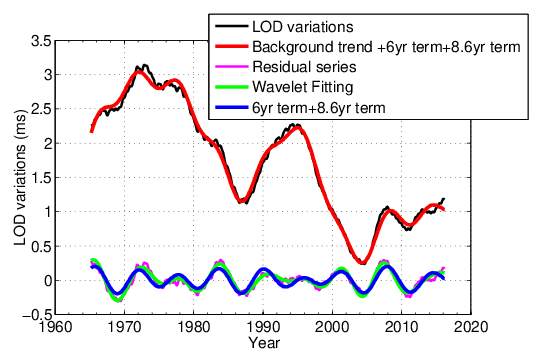 Recently, researchers at the Astronomical Geodynamics Research Center of the Astronomical Geodynamics Research Center of the Chinese Academy of Sciences and the Key Laboratory of Planetary Science of the Chinese Academy of Sciences have made new progress in the research direction of the change in the length of the EOP parameter. The amplitude-enhanced signal with a period of about 8.6 years found for the first time that there is a close correspondence between the extreme value of this oscillation and the occurrence of rapid changes in the geomagnetic field. At present, the work has been published online in the international journal Nature Communications; another study on the physical mechanism of the detection and attenuation and excitation of the 6-year-long changes in the signal is also published in the international geoscience journal Geophysics Journal of Geophysical Research: Solid Earth.
From outside to inside, the inner circle of the earth includes the crust, mantle, fluid outer core, and solid inner core. What physical structure do they have and how do they move? What dynamic coupling is taking place between them? How is the magnetic field in the liquid core generated, maintained and changed? These mysterious and important scientific information are very important for understanding the earth we are in and then extending it to the study of other terrestrial planets. Unfortunately, none of this information can be directly observed from the surface or space. Fortunately, these problems can be indirectly "observed" and studied by starting with the fine features of EOP changes.
Taking the change of day length as an example, due to the effect of the moon and the sun on the earth's tide, the rotation of the earth is getting slower and slower, and the day length is continuously increasing, that is, the day and night time are becoming longer, the average is about 0.002 seconds per 100 years . "In addition to the slower and slower rotation rate, scientists also found that there is a periodic change in the rotation rate. The change in day length has a spectrum of changes from one day to several decades, or even longer, corresponding to different astronomical and geophysical mechanisms. It is generally believed that interdecadal changes with a scale of several decades and sub-decade changes with a scale of about 5 to 10 years are likely to be related to the deep internal physics of the earth. The characteristics and origins of these periodic changes are what we are looking for and exploring, especially It is a characteristic of changes in the sub-decade. "Said Huang Chengli, a participant in the study and a researcher at the Shanghai Observatory.
Little is known about the fine time-varying characteristics of day length changes and related physical causes, but this part of the research is important for further understanding the characteristics of the internuclear movement of the core and solving the origin of rapid changes in the geomagnetic field. significance. The rapid change of the geomagnetic field is called geomagnetic abrupt change ("jerk").
"We studied and adopted the data of the change of daily length from 1962 to 2019 provided by the International Earth Rotation Service System (IERS), combined with a large number of numerical simulation examples, based on the standard wavelet time-frequency transform method (NMWT) and our independent development 'Beep Wavelet Edge Effect' (BEPME) strategy, although the NMWT method has a very high frequency resolution capability, which can distinguish different frequency components in the ten-year change of the day, the method has significant edge effect problems, and The BEPME strategy can make up for this deficiency, allowing us to accurately isolate the target harmonic signal. Based on this method, we first discovered the phenomenon of amplitude increase of the signal for 8.6 years. " Deputy Researcher Duan Peng said.
The results of the group's research show that there are actually two main component periodic signals in the ten-year change of Japan and Asia, with periods of 6 years and 8.6 years respectively. The superposition of these two signals can well explain the observed time-frequency characteristics of the ten-year variation of the Japanese sun. The previous work failed to clarify the different physical origins of the ten-year change of the Japanese sun, and their research showed that the signal with a period of about 8.6 years in the change of the Japanese sun's length is likely related to the torsional Alfen wave oscillation near the equator of the liquid core surface.
The earth is filled with a magnetic field. If the magnetic field lines of the magnetic field are imagined as individual strings, when the magnetic field is disturbed, the strings of the magnetic field lines will oscillate, and the oscillation will propagate along the magnetic field, forming an Alfen wave. When the lines of magnetic force are gathered into a tubular structure called a 'magneto flow tube', the Alfen wave propagating in the magneto flow tube is a torsion Alfen wave. The torsion wave propagates outwards and couples with the mantle, resulting in the same period of fluctuating signals in the day length. Researchers predict that a new geomagnetic turbulence event is likely to occur in the most recent 1-2 years.
"Our work negates the view that there is only a signal with a period of 6 years in the sub-decade cycle signal of the change in daily length that has been widely accepted in the world. The annual amplitude-enhanced signal also clarifies that there is a close correspondence between the extreme moment of the oscillation and the occurrence of geomagnetic abrupt changes. "Duan Pengshuo concluded.
Regarding the significance of this work, Huang Chengli added: "The prediction of geomagnetic abrupt changes is currently an international problem. Our work provides a new research portal that can accurately separate the sub-decadal oscillation signals of the earth's rotation. To predict the moment when geomagnetic abrupt changes will occur in the future. It is not difficult to see that through the study of the fine changes of the earth â€™s rotation, we can gain a deep understanding of the magnetohydrodynamic problems deep inside the earth. "

1.pigs can clearly see the food, a eat enough.
2. pig drinking water was significantly more than 30% savings in water, reducing sewage and sewage treatment pressure.
3. to prevent the metal drinking water to scratch the pigs, to avoid the chance of traumatic infection.